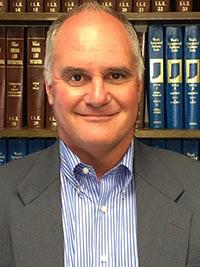 Mark S. Alderfer, born and raised in Marion, Indiana, received a BA from Indiana University – Bloomington in 1980 and graduated from law school at Indiana University – Indianapolis (Robert H. McKinney School of Law) in 1983. He was admitted to the bar in 1983 in Indiana and Illinois; U.S. District Courts; Southern and Northern Districts of Indiana; and U.S. Court of Appeals, Seventh Circuit. He is a member of the Indianapolis, Indiana State and American Bar Associations, the Defense Trial Council of Indiana, the Defense Research Institute and the American Board of Trial Advocates Litigation Counsel of America (ABOTA), Advocate level.

After graduating from law school, he served as a Monroe County Deputy Prosecuting Attorney from 1984 to 1986. He has been in private practice of law for over 30 years. Litigation experience includes trying over 100 jury trials as lead counsel and numerous bench trials. Practice areas include insurance defense, insurance coverage, first party litigation, bad faith, premises liability, motor vehicle accidents, ADR, Appellate, personal injury, as well as real estate, business and probate litigation. He has presented at continuing legal education seminars in his areas of practice over the years and has both the AV highest peer review rating as well as named as an Indiana Super Lawyer from 2012 to the present. He has been recognized by the Indiana Jury Verdict Reporter as one of the “most prolific trial attorneys” for over 15 years and was ranked first in Indiana in 2002.